If you’ve ever tried to sneak some extra cash from the bank at Monopoly or have tried to avoid paying rent when landing on Park Place, then we have good news. There’s a version of the game for you. This fall, Hasbro is releasing a special cheater’s edition of the game.

“A recent study conducted by Hasbro revealed that nearly half of game players attempt to cheat during Monopoly games, so in 2018, we decided it was time to give fans what they’ve been craving all along – a Monopoly game that actually encourages cheating,” Jonathan Berkowitz, senior vice president of Hasbro gaming says.

The object of the game is still to be the player with the most money at the game’s end, but it may be a little tougher to accomplish. The Cheater’s Edition will ask players to get away with cheating as many times as they can during game play. That means players can skip spaces, try to avoid paying rent, and slip a few extra bills from the bank when no one’s looking. 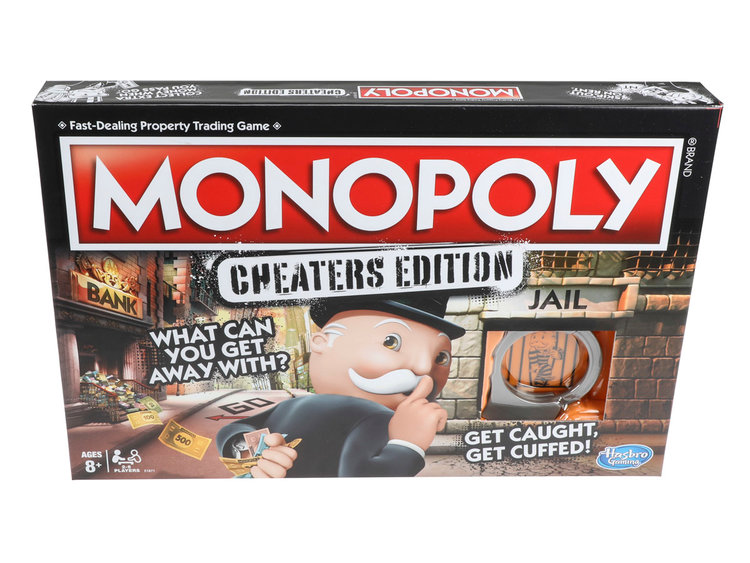 In addition to Community Chest and Chance cards, the Cheater’s Edition will also come with a stack of 15 cheat cards. During any point in the game, five cheat cards will be placed in the middle of the board which players can try to fulfill at any point of the game.

The cards will ask players to complete a number of tasks during gameplay, if they wish to do so.

Some of the cheats include:

If a player succeeds at any given task, they get rewarded. On the flip side, if they get caught, there are consequences. The back of the cheat cards list specific rewards and punishments for each cheat.

The best case scenario is that you may wind up with some free money or property to help you get ahead in the game. If you get caught, you could wind up in jail and wearing a handcuff that leaves you chained to the game. 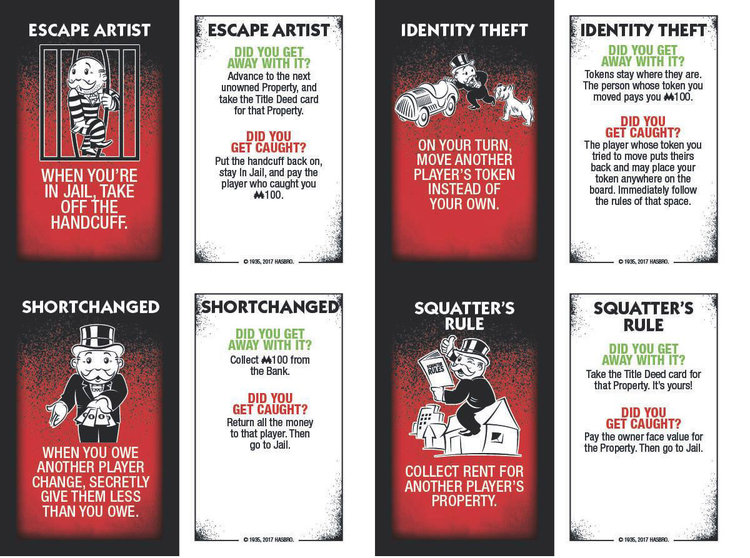 It seems like it could be pretty tough to swipe some extra money from the bank under the eye of a watchful banker, right? Well, the Cheater’s Edition changes that up, too.

“For the first time in Monopoly history, there is no designated Banker,” says Berkowitz. “Players are in control of the Bank on their turn, and pass it to the next player when their turn is over, making it easier to pull of “cheats” such as a the Bank Heist.”

If you take a close look at the game board, a few of the spaces have been “hacked” by cheaters. Several spaces have designated prices on them. If you’re the first to land on Pennsylvania Avenue, you don’t need to pay for it. The property is free for the taking.

So if you’ve never been good at Monopoly, this version of the game may give you a leg up as long as you’re a sly competitor.

“We’ve finally decided to embrace our less-than-honest fans by encouraging them to partake in those iconic (yet sometimes unspoken) Monopoly moments that occur during family game nights,” says Berkowitz. “We’re excited to see what fans can get away with and how they’ll react to the new sneaky twists in the game.”

The Monopoly Cheater’s Edition will be available in the fall for $19.99 for ages eight and up.

April 22, 2016 PdtS Comments Off on Man Tries to Prove Same-Sex Marriage Is Wrong By Marrying His Macbook

Marcos Rodríguez Pantoja was once the “Mowgli” of Spain’s Sierra Morena mountain range, but life has changed a lot since

Some Circumstances Some Nations

Japanese woman apologizes to colleagues for getting pregnant ‘before her turn’

April 4, 2018 PdtS Comments Off on Japanese woman apologizes to colleagues for getting pregnant ‘before her turn’
Some Science

March 30, 2018 PdtS Comments Off on All Vatican goes loose after Pope says hell doesn’t exist
Some Nations Some Science

March 27, 2018 PdtS Comments Off on Kickstarter campaign open for sliced ketchup
Some People

Waiter says firing him for rudeness is discrimination against French

March 26, 2018 PdtS Comments Off on Waiter says firing him for rudeness is discrimination against French
Some Circumstances Some People

March 21, 2018 PdtS Comments Off on Man who taught dog Nazi salute and filmed it found guilty of hate crime
Some Businesses

Snapchat asks if you would slap Rihanna or punch Chris Brown, loses $1B

March 17, 2018 PdtS Comments Off on Snapchat asks if you would slap Rihanna or punch Chris Brown, loses $1B
Some People

March 17, 2018 PdtS Comments Off on Girl slashes boyfriend with katana for playing games and installing Tinder
Some Nations

March 14, 2018 PdtS Comments Off on Russian hackers tried to save Star Wars’ General Hux throughout filming
Some People

March 8, 2018 PdtS Comments Off on McDonald’s celebrates International Women’s Day by flipping its logo
Some Nations

Canadian doctors protest being paid too much

March 7, 2018 PdtS Comments Off on Canadian doctors protest being paid too much
Some Businesses Some Circumstances

March 6, 2018 PdtS Comments Off on Facebook polls users if it should allow men to ask kids for nudes 🤔
Some Circumstances Some People

March 5, 2018 PdtS Comments Off on Man insists his girlfriend isn’t pregnant moments before she gives birth
Some People

Woman poisons her American lookalike with cheesecake to steal her identity

March 2, 2018 PdtS Comments Off on Woman poisons her American lookalike with cheesecake to steal her identity
Random Some People

Dumbass pees all over elevator buttons, gets trapped inside [Video]

March 1, 2018 PdtS Comments Off on Dumbass pees all over elevator buttons, gets trapped inside [Video]
Some People

Tattoo addict inks entire body including eyeballs and inside mouth

February 28, 2018 PdtS Comments Off on Tattoo addict inks entire body including eyeballs and inside mouth
Some People

Dude gets on wrong plane, slides down through emergency exit

February 27, 2018 PdtS Comments Off on Dude gets on wrong plane, slides down through emergency exit
Some Science

February 22, 2018 PdtS Comments Off on Thanks, science: antidepressants work for treating depression, study finds
Some Nations

February 20, 2018 PdtS Comments Off on Russian woman used air vent to dry her underpants mid-flight [Video]
Some Businesses Some Circumstances

February 9, 2018 PdtS Comments Off on Welcome to 2018: Dairy industry fights Veganuary with Februdairy